In 2020 my eldest child started primary school. I was nervous. He was nervous. Even though he had surprised me greatly with how he transitioned to kindergarten, school seemed a big leap from play-based learning to a more structured environment. He had formed a few friendships, but he still did not have a strong crew. He was very drawn to playing more with the girls who were more gentle and less boisterous. He was moving to a semi-large school which had FIVE foundation classes with about 18 children in each class. Which is a big leap from being at a kinder that had only 2 four-year-old groups (the other group he never saw).

We did all the usual (or maybe a bit more) preparation stuff. Read some books, did role play, watched some shows, attended the transition days, and spoke of the things to be excited about. Also, we encouraged him to speak up if he needed something from the teacher or with another child. He also took his teddy; we had a little family photo album in his bag and a few other things we did along the way.

A couple of weeks before school started, he really started to have trouble going to sleep. He would toss and turn and huff and puff. He finally managed to let us know he was getting worried about starting school. I wish I had known how much it might impact his sleep.

On the first day, we were welcomed into the classroom and allowed to stay to settle them, watch them put their items away and do some activities like drawing. He was nervous that morning but was excited to get there. He did not need us to stay long, and after watching him for a bit he was ok with us leaving. No tears or clinging. I had no idea how much my heart would pull walking away from the school that day. An end of an era with him being mostly at home in my care. Him needing to really step up and have a lot more independence. The worry I had about will he manage ok socially, will he let a teacher know if he needs help or is being bullied. I wish I had known how big of a transition it would be for me. How much I would have to surrender my trust that the school will care for my child.

The second day we were not invited into the classroom. Or any day after that. As it turns out his first year of school was going to be during a global pandemic. So besides spending most if his year at home with me, when he did return to school, we were not even able to enter the school grounds. I wish I had known that the second week of school can actually be the hardest. All of a sudden, he was switched onto this business of school and did not want to go. We were the ones where the teachers were pulling a screaming child off me. Him telling me after school each day how much he hated it. It surprised me in some ways as he had done so well with kinder. It broke my heart.

I wish I had known how quickly he would mature and grow up once he started school. He was learning so much through his lessons which would randomly slip out in conversations (he wasn’t big on re-telling me what he did at school straight away). Other random stuff that would slip out was new not so nice words, who was dating who and what anti-social or “naughty” activities some of the kids were up to. He was now exposed to so much people, behaviours and new experiences. No wonder he was epically tired and had a few 6pm bedtimes on school nights.

At kinder there was already some kids writing and some who could already read some words or knew the sounds of words. I had been a tad worried about his lack of interest in writing. When we were doing remote learning, it was such a battle to get him to try and write. We hardly did any writing as it was not worth the worry it caused. I wish I had known that he would write when he was ready too (same goes with other tasks). I was amazed that when he went back to school in term 4, he very quickly picked up with his writing and actually started to enjoy it. I should say my teacher in-laws did try and reassure me this would be the case, but it’s hard to believe it until you see it.

Finally, before you know it you are a school mum. There is no going back. You may likely have more kids to follow. Your day revolves around drop off and pick up, school lunch and uniform preparation. Your year is planned around school terms and school holidays. I wish I had known that it’s such a big (not negative though) change to the whole family’s dynamics and routines.

Wishing all those starting school this year a wonderful time!

To the mamas ‘You’ve got this”.

All the kids deserve a fab year after what 2020 involved! 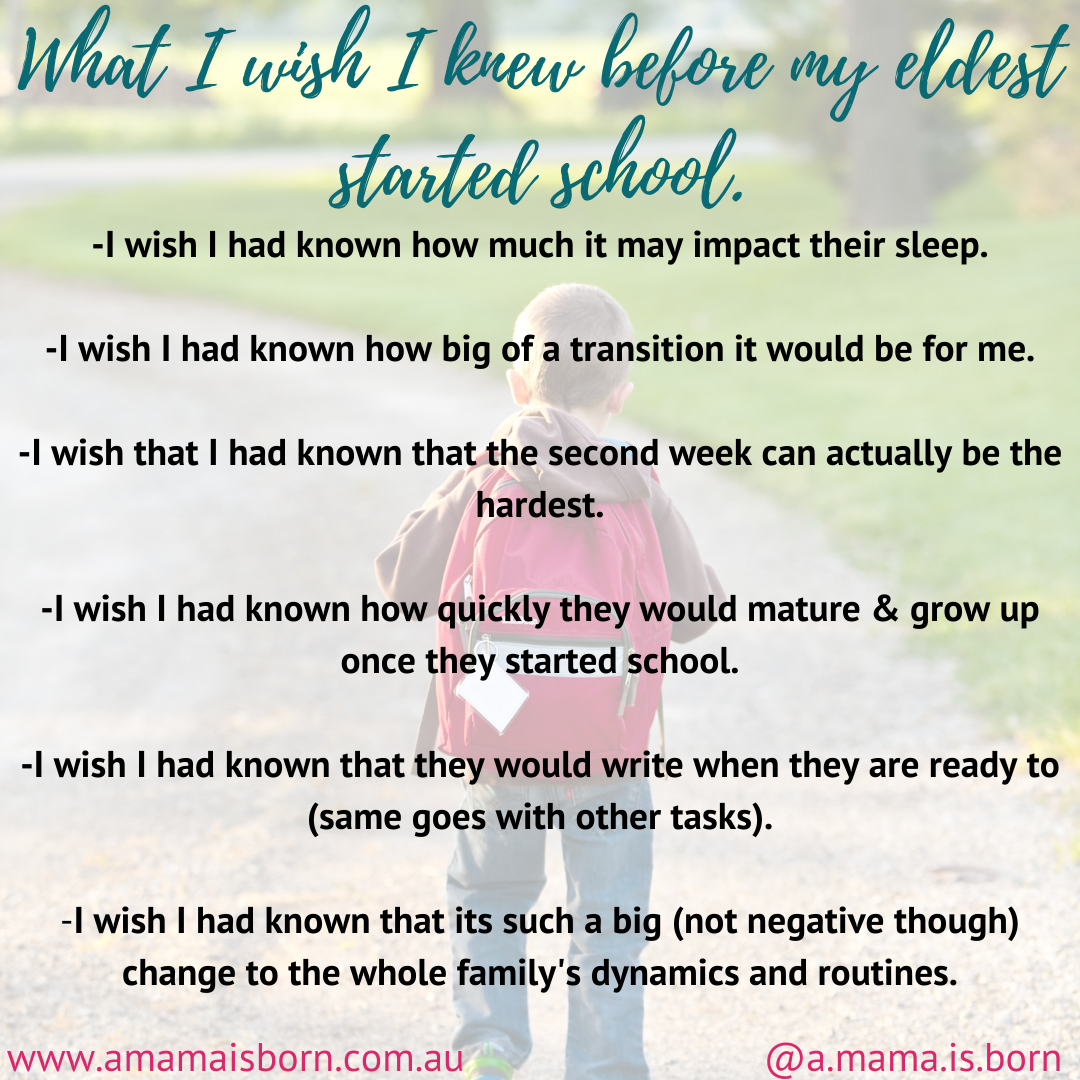 5 ways to celebrate self-love on Valentines day (or any day).